One of the things that’s really improved my workflow in recent years is using pre-comit hooks for git. Tools that help with code quality and style are everywhere these days and obviously help tremendously in both catching bugs as well as enforcing agreed upon style rules. And while these tools should be included as a natural part of any build pipeline, having to wait for the CI/CD server to build your branch and report back on any code quality issues can be both time consuming and annoying. While it’s obvious how to avoid that - by running tests, code quality checks and formatters locally before pushing commits, or at least preparing PR’s - I just constantly forget about it. Pre-commit hooks to the rescue!

Running hooks in response to events is functionality built into git, but having to manually manage shell scripts for each repository being worked on quickly becomes a real chore, and the idea here is to make us more effective after all. The pre-commit framework is a “framework for managing and maintaining multi-language pre-commit hooks” and does just that. Though it’s called a “framework” it’s dead simple to use, simply by following these three steps:

That’s it! Anytime you run git commit from now on, the hooks will be called and any errors reported in hooks like test runners, linters or formatters will now abort the commit, let you fix the issues before re-adding the files to the staging area and reattempt the commit.

Having spent considerable time with Open Policy Agent (OPA) in the last year or so, one thing I’ve really come to miss when authoring and testing policies is pre-commit hooks. OPA comes with a few command line tools to help out during developoment, such as opa check to verify syntax, opa fmt to format rego policies, and opa test to run unit tests. Not having these run by default before commiting has occasionally meant forgetting about it, only to be reminded either by the CI/CD server or a colleague reviewing the policy. We can’t have that! So a couple of weeks ago I looked into writing my hooks for this purpose, and it turned out to be dead simple. Adding some fixes based off of real usage in my OPA repos since, and I think they’re now in a state where they’re good enough for general use. I hope you’ll find the pre-commit-opa hooks useful in your OPA projects. 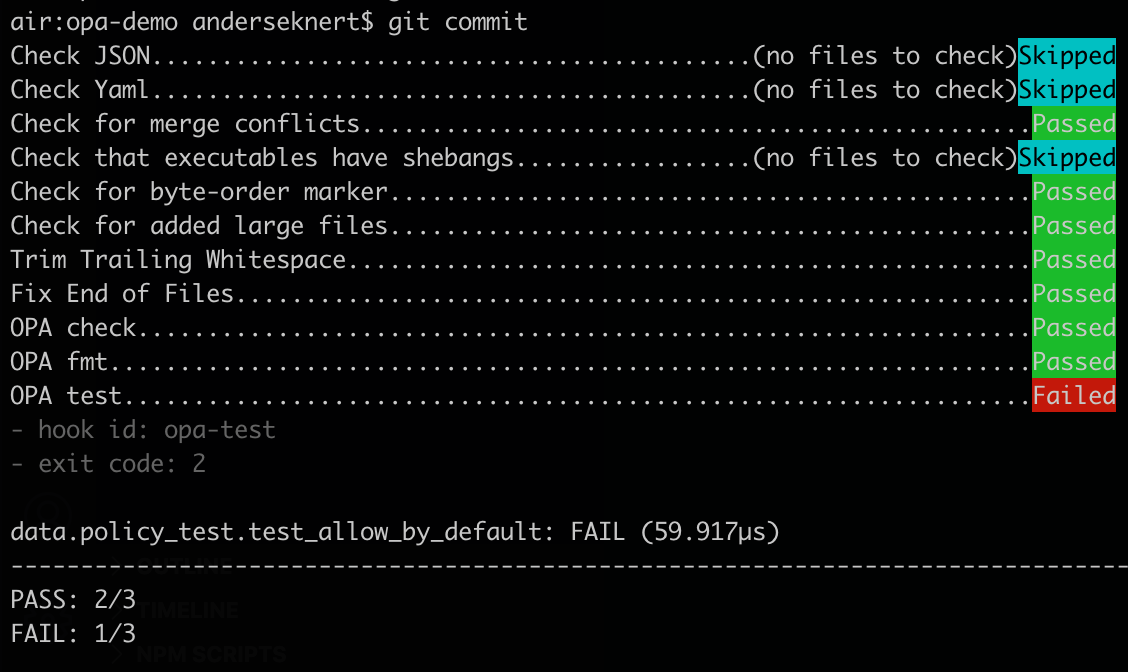